Another buzz word enters the arena. Two letters: AR, short for Augmented Reality (wikipedia definition). This concept has long been prophesied by the writers of the cyberpunk genre. However, with the advent of the always-on smart-phones outfitted with a GPS sensor, a magnetometer (a.k.a. digital compass) and live camera view finder, augmented reality is entering our reality real fast…

A flurry of workable applications have appeared in the last view months. One of the first notable application Wikitude appeared on Android devices in the Fall 2008. What made this development possible was a combination of hardware and software features, officially or unofficially supported. Google’s OS is fairly unrestricted in that sense, which explains why the developers chose that platform first. To bring it to the iPhone, the single most addressable user-base to date, the developers had to wait until Apple finally made it possible to leverage the view finder of the camera to “add” to the reality. Small things matter, and developers are into small things! Here is how Apple implicitly started to support augmented reality on the iPhone; the following line appears in the documentation of the Phone OS 3.1 SDK update:

This new and simple “property” means that the software now lets the developer add an overlay (i.e. anything) on top of the camera view finder while you are aiming the “camera” at a scene in front of you. That’s it! Pandora’s box is now open!

How does AR work? It is by no means a revolution in the technical sense; it is merely a re-rendering of what we have grown accustomed to: GPS & POI (Point of Interest) mapping. In fact, one may argue that augmented reality begins with the arrival of GPS devices, and improved with newer generations of network enabled devices (real-time traffic updates, etc…). However, rendering on first-gen GPS devices was simulated in 2D or at best in 3D and not “real” looking. So the term was not really legitimate.

AR starts with the camera view finder, the GPS location, and the compass. This trinity allows the device to know where you are, and in which direction you are looking at. The camera view finder is inevitably what you are looking at (or at least, usage makes this true). Then it is only a matter of adding the POI on top of the view finder, perhaps changing the size of the objects by using simple math and distance calculation (big = close, small = far away), perhaps with an arrow to indicate direction. 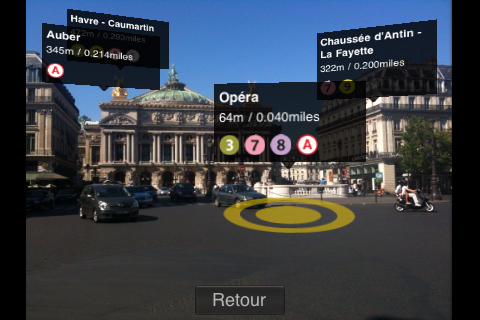 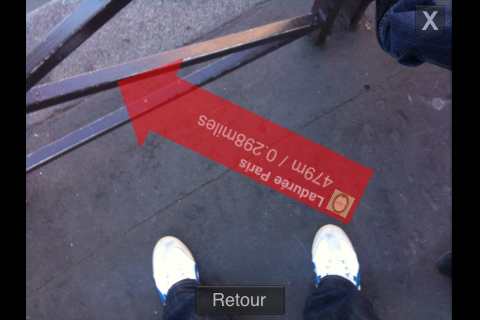 Today, the category is blossoming, bringing us AR centric applications as well as applications where AR is just a subset of the main app.
To illustrate this point, here is sample selection of iPhone Augmented Reality apps:

The benefits are obvious for tourists in need of help to go from A to B in unknown territory. In the same vein, AR may provide additional context in finer grained environments such as Museums: http://www.cultureclic.fr was recently awarded a French subsidy to develop such a service.

Now let’s venture into the world of work and into the future. How may AR be applied to this context and especially as a tool to the information workers? Are we far off? Can we add context to people as much as we add context to maps and locations?

The following concept illustrates what may soon be part of the arsenal in our day-to-day reality at work: 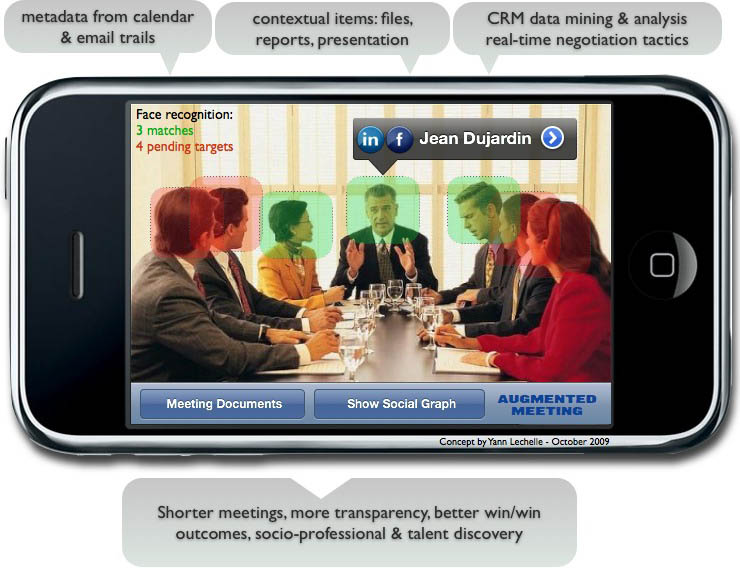 Technically, most if not all bricks exist:

Imagine the possibilities of using this in a mixed context: in a large meeting with customers & partners, in a forum or round table.

The hypothetical productivity gain would be gigantic: no more wasted time on missed document, improved efficiency in finding related material or individual skills needed to achieve the goal of the meeting. Also, imagine using this tool to maximize the number of relevant encounters: prospects, clients, colleagues – that you would have otherwise missed by lack of knowing better. The social graph is only available online today; with augmented reality, the social graph springs in front of you.

Unfortunately, one could easily envision a worse scenario: polarization of the workforce and creation of a new digital divide, this time within reality, leading to an increased pressure on the individual to expose herself digitally, perhaps even leading to reality withdrawal. Then the regulators will step in, stating that pulling a smartphone out of your pocket is prohibited in meetings that involve more than 2 people… A dystopian future again.

Or not. We will find out soon enough.